A Manifesto for Charlton: Time for a Change 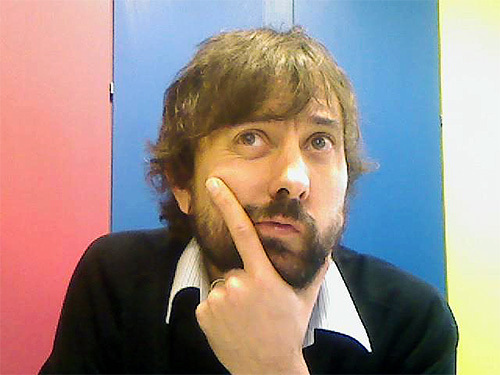 Recently myself and my fellow candidates (Ian Gerrard and Richard Mbogga) had the chance to speak at the first ever Council Election hustings for Charlton ward. It was a great event and we thank The Charlton Society for organising it.

As part of the opening statement we were asked to give our main three main priorities for Charlton, and I thought I'd share one of them with you here.

Charlton - a destination in itself

A major theme of the Lib Dem manifesto is 'No More Forgotten Areas'. This council seems preoccupied with the three major town centres in the borough: Greenwich, Woolwich and Eltham. These areas may be larger, but that doesn't mean that areas like Charlton should be overlooked. Indeed, Charlton has so much going for it that we should be shouting about it from the rooftops!

If you look on a map at just some of the highlights Charlton has to offer- Charlton House, Charlton Park, Maryon and Maryon Wilson Parks, the Lido, the Thames Barrier, Charlton Athletic - you will see that slap bang in the middle is Charlton Village. Charlton Village could be the centre of a fantastic day exploring the area, but it is in a poor state. Despite the best efforts of the existing businesses the Village has long been in economic decline and is badly in need of a boost.

To this end, some of the measures we would advocate include:

When it was put to our current Labour councillors at the hustings that Charlton had been 'overlooked' they argued this was not the case. To back up their point, Councillor Gary Parker cited:

The Arts Centre was certainly news to me! Sounds promising. I asked Gary for more details via Twitter. His response [See below] was 'it is a proposed arts project, more information when new council is formed.' 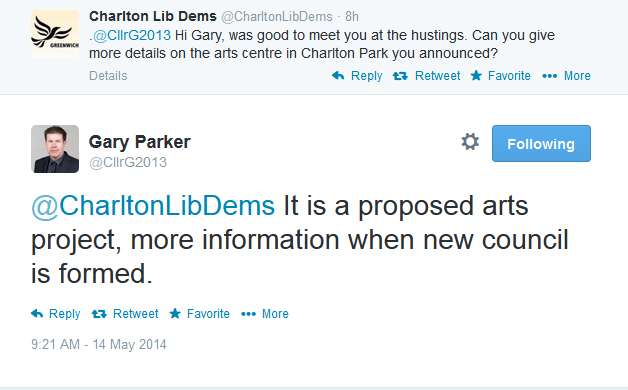 So, no real information there, we'll just have to cross our fingers and hope something happens.

As for the 'continued' investment in Charlton House, I don't see much evidence of that either. For such a great building it can often resemble a ghost house inside. Gary told us a Heritage Trust is being set up to look after a number of special locations in Greenwich, including Charlton House. However, rather than Charlton House being just one of many priorities for a new Trust, perhaps Charlton House could learn a thing of two from the excellent running of the nearby Mycenae House? If they can do it, why can't we?

Charlton Athletic Community Trust does great work of course, it's a shining example to other football clubs in the country, but I am not sure how it is evidence that our Councillors have made sure Charlton isn't overlooked.

And as for the Lido, this is Charlton Lido that - if it wasn't for a brilliant campaign by local residents - would have been renamed 'Royal Greenwich Lido' as soon as it had finished being refurbished, the management deeming 'Charlton Lido' not fancy enough for such a swanky facility. Of course, none of this would have happened in the first place if the council hadn't managed to spend £125,000 buying back the lease it gave away for free.

All in all, we say that much more can be done to revitalise Charlton Village, creating jobs for local people, and turning Charlton into a vibrant destination in its own right, not just somewhere people drive through to get elsewhere.

Your Liberal Democrat Council Candidates for May 22nd: