Right, fresh from yet another row, with people I respect, I want to finally write my response to the arguments against the Lib Dems going into coalition for the last 5 years.

The charge, in a nutshell, is that the Lib Dems sold their souls to the devil in 2010 when they had to choose between forming a government with the Tories or staying in opposition. They saw ministerial boxes, limousines and miniature whisky bottles with a special 'Member of Government' seal on them or something and ran to the cabinet table. They left the country at the mercy of the vicious Tories while Lib Dem junior ministers spent 5 years calling each other up from inside the corridors of power shouting 'GUESS WHERE I'M CALLING FROM!'

While the Lib Dems fiddled, the UK burned, as the Tories introduced the bedroom tax and the Lib Dems casually tossed tuition fees aside in return for government stationery that had their names on in that special gold curly writing.

Or, to condense the above argument to its rawest, most common form - BEDROOM TAX!!!!

So, to tackle my three main bugbears …

'You've sold out for posh cars you treacherous bastards!'

I don't buy this at all. It seems a long time ago now, but the backdrop to the 2010 election was massive economic turmoil, not just of the 'the Dow is down …' variety but of the actual 'We may be required to melt down the Eiffel Tower for scrap' variety. And at a time when such a situation as this probably might have benefited from a classic First-Past-The-Post government majority, the country didn't return one. Instead the Tories were the biggest party and, after unprecedented negotiations in a country that just didn't do coalitions, a government was formed that was stable (despite predictions) and that represented, as well as possible I'd argue, the will of the electorate.

Labour of course were courting the Lib Dems at the time to form their own coalition (Clegg apparently saying Brown had to go as a condition). Presumably those on the left of the political spectrum who cry traitor at the Lib Dems for 'propping up the Tories' would have had no problem if it was Tories shouting traitor at the Lib Dems for 'propping up Labour'. The assumption goes that if Lib Dems had retained their dignity and declined the Tory advances then there would have been some sort of magic arrangement that led to the Tories going away and everything being fine. The thinking about how this arrangement would have worked is always very sketchy. The closest I've got to details is a Tory minority government where every measure was negotiated with the various opposition parties who, in the national interest, wouldn't dream of playing politics to engineer the government's downfall and force another election, but would consider each case on its merits and only agree to pass the really good, lovely measures the Tories proposed.

Nick Clegg addressed this issue in his speech at the manifesto launch today. Unsurprisingly, he is a lot more eloquent than I am. Perhaps that is why he is leader.

"But the truth is, I could be stood in front of you today in very different circumstances. Five years ago, when you gave no party the right to govern on their own, when you gave the Liberal Democrats the chance to join the Government for the first time in generations, we could have ignored you, taken the easy way out and said 'no thanks'. We could have left a Conservative party without a majority in parliament to deal with an economy on the brink of collapse. We could have watched them fail. We could have stood by as the economy went under and people lost their jobs. And we could have watched the Conservatives make the poorest in society pay the price. Then I could have stood in front of you on platforms like this and criticised them for it" - Clegg 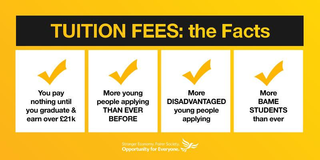 A nightmare for Lib Dems, arguably an episode that has caused as much trouble for Lib Dems inside the party as it has for people outside.

I can't pretend to talk for the party here - and in fact this whole post is me talking as an individual Lib Dem, not officially representing the Greenwich Lib Dems - but my feeling is that scrapping tuition fees given the economic meltdown and the changing face of university education was a non-starter. It wasn't long ago when going to university was restricted to a relatively small proportion of young people and a promise of zero fees was achievable, but now more young people are going to university than ever before and the universities have been facing a funding crisis.

How we got to the situation we are now in has been horrifically damaging for the party but I believe the progressive graduate tax currently in place - which is what it is - is the best solution possible.

Ed Miliband playing politics with the issue and pledging to cut fees to £6k is risible and has been created purely to back up an election soundbite; it is the worst sort of policy-making. Vince Cable summed it up best for me

Bedroom tax. Two words that appear to be the answer to almost any sentence that contains the words 'Lib Dems'. It's been a terrible policy. I can make a defence for the rationale behind it, but I have none for how it was implemented. A policy that looks to make best use of existing social housing, I can defend. For instance, is it a 'good thing' that a young family languish in a one bedroom flat while an elderly couple struggle to maintain a 4-bed house that they no longer need? No, I don't think so. But should that elderly couple be forced from their home without proper consultation and guidance and help to move? Of course not. Should a disabled person who uses a spare room for physio or related use be made to give up the spare room? Of course not. The Lib Dems led the revisions to knock off the sharpest edges but by then for many the damage was done.

The point I'd make about the bedroom tax is that its popularity as an attack on Lib Dems shows it is an outlier. It is the clearest, neatest example of the 'best' worst policy that the coalition passed. Look at it this way: if two people are going on a car trip and decide they can only fit 10 CDs in the glovebox, then no matter how awful the CDs that the junior navigator vetoes, if the driver's CDs are ALL pretty awful, and he is allowed 7 CDs to the navigator's 3, then you may still end up with a Phil Collins CD in there somewhere. There are lots of evil things the Tories would have liked to do; see here for some of them. There is a reason why cutting inheritance tax and slashing £12bn out of the welfare budget are in their manifesto; it is because they were stopped going that far in government.

Coalitions are about compromise. The repeated bellowing of 'bedroom tax', while conveniently ignoring things like the pupil premium, stopping the routine detention of immigrant children, lifting the poorest workers out of income tax, and legalising gay marriage just makes me think how far we as a country have to go before we get used to that idea.

Having spent the last 5 years polishing their outrage over the treacherous Lib Dems propping up an undemocratically elected senior party, it will be fascinating to see the contortions Labour have to put themselves through if they find themselves relying on the SNP for a majority come May 7. No doubt if that happen a Lab-SNP coalition will be a democratic expression of the will of the electorate …

And as for Labour being the answer to the evils of the last 5 years? Well, maybe, maybe not. Mark Pack points out some downright scary Labour rhetoric on this, from Harriet Harman and Rachel Reeves, for instance. But I'm an optimist, and I don't mean to argue that the Lib Dems are just as bad as everyone else. Rather that at a time when the country has been on its knees, the Lib Dems are about to take a massive hit for taking a decision to help put the country back on its feet, and passed some genuinely progressive liberal measures while doing so.

What have the Lib Dems done in Government?