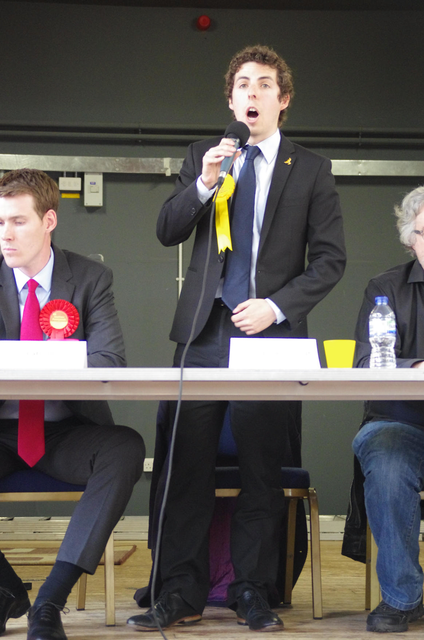 Kick off was 2.30pm and was chaired on the platform by Charlton society committee member, Andrew Donkin, and co-hosted in the audience with a roving mic by Helen Jakeways. This was the team that organised the local hustings for Charlton and Woolwich Riverside wards last May and you could see they knew what they were up to. By the time Andrew tinged his bell to get us started there was hardly a spare seat in the house (approximately 120 attendees all told), an excellent turnout and tribute to the excellent marketing by the Charlton Society. Attendance would have been at least 121 but Green candidate Abbey Akinoshun pulled out on the morning of the event for personal reasons, which was a shame.

After a brief run-through of the rules by the chair the candidates were each given four minutes to introduce themselves and briefly highlight which of their policies they felt most relevant to the local area. Perhaps unsurprisingly the Labour, Conservative and Lib Dem candidates all flagged up the problems of local transport in the area and the different ways they would seek to resolve them. The UKIP candidate went one Oyster card further by not being present as he was stuck on a bus, a neat piece of theatre to prove the point on his part (possibly).

With the intros out of the way we were into the meat and drink of the event, questions from the audience. I won't pretend to remember all the details of these but a few moments and thoughts penetrate through the post-hustings pub session fog…

First dealing with each of the candidates, it was clear from my view in the cheap seats that the two Matt's (Pennycook and Hartley) were clearly battle-sharpened by their years as local councilors and working as policy advisors of one sort or another. Not too far behind them - in my view at least - was my colleague Tom Holder, the - er - holder of the Lib Dem flame in Greenwich and Woolwich on May 7. Despite this being Tom's first candidacy he acquitted himself admirably and showed no sign of nerves, giving clear answers on a whole range of questions.

The remaining candidates were Lynne Chamberlain for the TUSC and, arriving shortly after the questions started, Ryan Acty for UKIP. Having expected little from either I must admit by the end of the 90 minutes I had respect for all candidates, even if Acty was slightly too obviously reading from his party manifesto at times. Chamberlain is clearly a passionate and dedicated campaigner but, to my no doubt capitalist-pig-dog ears the TUSC plans seemed to be little more than waving a magic wand that made rich people give all their money to poor people and then the government spent all its money only on lovely things not bad things. At one point Chamberlain pledged to 'get rid of Bilionaires'. I missed the rest of that answer as my overactive imagination tried to imagine what she meant; melt them down? Throw them in the Thames? Who knows.

As for specific questions, the issue of Legal Aid came up (everyone agreed the cuts were savage and needed to be addressed in one way or another). Another topic was Foreign Affairs which quickly morphed into the candidates view on Israel-Palestine; Tom Holder caused a minor heart flutter when he appeared to favour a one-nation solution to the conflict before quickly correcting himself. 'We nearly had a news story there' quipped Matt Hartley.

We nearly had another news story moments later as the temperature in the room got increasingly heated on the issue of housing. Showing his inexperience slightly, Tom came close to what appeared to be accusing previous MP Nick Raynsford of being in the pocket of developers. An angry Matt Pennycook requested a retraction, as did Matt Hartley. To his credit Tom addressed the point immediately on the next (related) question by clarifying that he was merely pointing out that an MP consistently earning over 100K a year from the housing industry, on top of his parliamentary pay packet, could hardly be seen as a true independent on the issue of housing in his own borough. Matt Hartley seemed unimpressed with the clarification but I felt it was probably fair enough, especially considering Matt Pennycook's own pledge card seems specifically geared to positioning himself as the 'Not Nick Raynsford' candidate.

The tempestuous housing question aside, I was impressed with the good grace that all the speakers maintained in the answers to the crowd and each other. Party political point scoring was deployed at times but never - well alright, rarely - gratuitously. Sadly, the point scoring was more visible in the audience, in particular from a smattering of 38 degrees campaigners who used a question, ostensibly on the NHS, to make a speech and then proceeded to jeer any answers they didn't like. Having previously had a decent opinion of 38 degrees and the work they do I was disappointed by their behaviour.

And so, with over 100 people all hussed out, myself and a large Scottish gentleman headed next door to the pub, where the chair had previously announced everyone was invited to mingle after the event. The White Swan isn't going to win Pub of the Year (although in the Charlton regional finals it probably has a chance) but it was good to put sabres aside and talk over a pint with members of the opposing teams. The UKIP pair stood in the corner with little attempt on either side to interact but it was a pity that Matt Pennycook and his Labour colleagues couldn't hang around to join us, it would have been nice to say hello.

A final note; I did my best, both via the #se7hustings hashtag on Twitter and in this post, to give credit where due to all the candidates, it takes guts to get on that stage and put yourself out there. It is sad therefore to read mean-spirited posts like this from sitting councilors who you'd think could be more gracious.

And so, 10 more days to go until May 7, best of luck to all the Greenwich and Woolwich candidates, and indeed all the candidates everywhere.