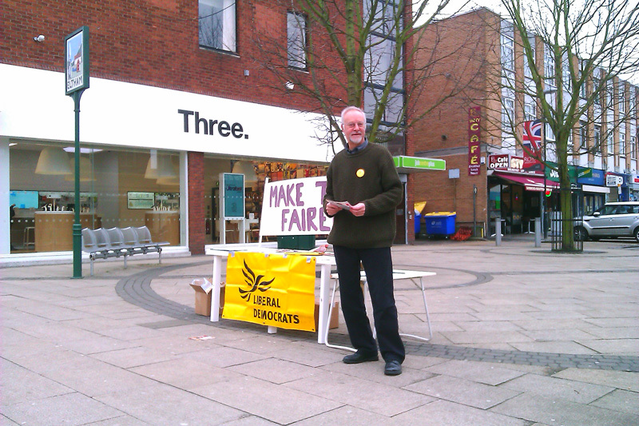 Local Liberal Democrat campaigners were out and about across the borough this month promoting the fairer taxes enjoyed by the hard working people of Greenwich Borough. Liberal Democrats in Government have secured a £600 tax cut for those on an average wage through raising the allowance and Lib Dems would like to see this tax cut increased to £700 in this years Budget.

At the same time as those on low income are paying less tax, local Greenwich Lib Dems are backing the party's ground-breaking Mansion Tax to make those with properties worth £2m pay more. Campaigners ran street stalls in Eltham and Greenwich and are delivering leaflets on this issue right across the borough inviting residents to back the campaign to make taxes even fairer.

"We have had a great reaction from people on the streets of the borough who are finding this extra cash a great help," said local campaigner Mike O'Keefe.

"Tens of thousands of people have already backed the campaign to cut Income Tax in March's Budget and it is important that as many people as possible support it - every extra signature will be important."

To back the campaign please visit www.fairertax.org