Anyone passing through West Greenwich recently will have seen the campaign to save the community garden on Royal Hill. This formerly derelict council-owned land has been restored by a small group of local residents. More than 2,000 people have visited the garden and signed in support of it. 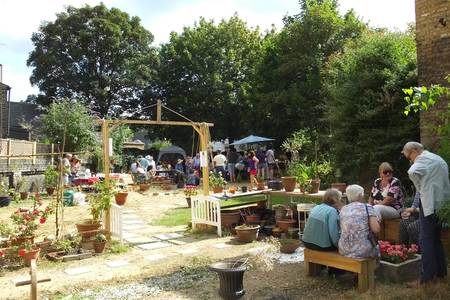 The history of this small patch of ground is interesting and diverse. Originally a railway siding, the site was more recently used by the police station as a car park. In 2013, the council put in an application for four houses to be built here. However, this planning application was refused in 2014, on the grounds that it “would result in a visually dominant and obtrusive form of development”.

After this time the site fell back into disrepair, with rubble and litter strewn over the ground. Break-ins occurred in neighbouring buildings. In April 2016, a group of local residents decided to smarten up the plot and began building a garden. Garden furniture was built using materials left on site and plants were donated. Now it is used by young families, workers at lunch time, retired people and unemployed people as a place to rewind or work with their hands.

On 17 November this year a representative from the Greenwich Valuation and Estates Department sent the people behind the garden an email. It acknowledged their “intention to make the site more pleasant”, but told them to “make arrangements to remove your items which currently form a part of the trespass on the land”. The Council is once again close to submitting a planning application for the site.

We as Liberal Democrats support London’s need for new housing: Caroline Pidgeon in her recent mayoral campaign called for 200,000 new houses to support London’s growing housing needs. However, we think this case shows several failings of the Council to work together with the local community they serve.

We view the Council’s action as unacceptable. We believe this garden represents a fantastic example of local people taking action to provide a community resource. We accept that redevelopment is likely to happen at some time in the future, but there cannot be any redevelopment until the Council has 1) submitted an application, 2) put it out to consultation with local people and 3) secured planning permission from the planning committee. Until work is actually going to start on redeveloping the site we believe that the Community Garden should remain in place. As such we see the current request that the site be vacated immediately as premature and unreasonable.

We also believe that some of Greenwich Council’s recent decisions on issues such as the Silvertown Tunnel and the Enderby Wharf cruise terminal will have negative impacts on our borough’s health, happiness and well-being – the Council must ensure that any plans for the Royal Hill Community Garden site have a positive impact on the local environment and community.