The Silvertown Tunnel: how to stop this polluting project affecting Woolwich as well as Peninsula and the rest of the Borough

On Thursday 11th July 2019 I attended a full Public Meeting organised by SpeakOut Woolwich, the active residents group in Woolwich, at St Peter’s. Speakers included Adetokunbo Fatukasi (Liberal Democrat Greenwich & Lewisham GLA Candidate, reading out a statement on behalf of Caroline Pidgeon, AM), Caroline Russell (Green Party London Assembly Member), Councillor David Gardner (Labour), as well as local residents and activists from Extinction Rebellion and Stop the Silvertown Tunnel Coalition. Greenwich Liberal Democrats are amongst those continuing to oppose the Tunnel – I summarise what I took from the meeting in terms of where we are now, and the need for urgent action to halt the Tunnel before it’s too late. People need to contact the Mayor, their Councillor and GLA representative before August.

The damage the Tunnel would do

Speakers took us through the history of the proposed tunnel (which would link Silvertown and Greenwich Peninsula), including how green initiatives to which the Tunnel had initially been tied, such as extending the DLR, had now been axed due to lack of funding. Most speakers were clear about their opposition to the Tunnel on the basis of air quality as a public health issue, congestion and noise. So much has been written about this elsewhere, I shan’t repeat it here e.g. https://silvertowntunnel.co.uk/# An important issue that was flagged up was how the Tunnel could disastrously interact with the proposed extension to the Ultra Low Emissions Zone, which covers only part of Woolwich, and could potentially shunt more polluting vehicles our way: https://853london.com/2019/07/18/greenwichs-air-pollution-chief-slightly-optimistic-about-ulez-effect-on-woolwich/

As Caroline Pidgeon, Lib Dem AM, said – the Tunnel is the ‘wrong answer to the wrong question’. Instead of looking at how we can redistribute traffic, massive new infrastructure projects like this should be addressing how to improve public transport, walking and cycling, and accessibility.

Despite the presence of Labour activists campaigning against the Tunnel, Cllr Gardner gave a speech in defence of the proposal, which writer Christian Wolmar wryly described as a ‘valiant attempt’. Cllr Matt Morrow (in the audience) also made a pro-Tunnel speech. A statement was read out on behalf of Matthew Pennycook MP, which was against the Tunnel; that on behalf of Len Duvall (Greenwich and Lewisham Labour GLA member) was pro the Tunnel and said it had gone too far to be stopped. The organisers were understandably upset that no-one from City Hall had responded to their invitations to attend nor sent a statement.

A long campaign entering its Endgame

Jenny Bates (Friends of the Earth) acknowledged that there has been a relay of campaigners and campaigning groups, which is understandable given the length of the process and the toll being involved takes on participants. Greenwich Liberal Democrats were the first local party to come out against the proposal back in 2013: https://www.newsshopper.co.uk/news/10788439.greenwich-liberal-democrats-come-out-against-silvertown-tunnel/ 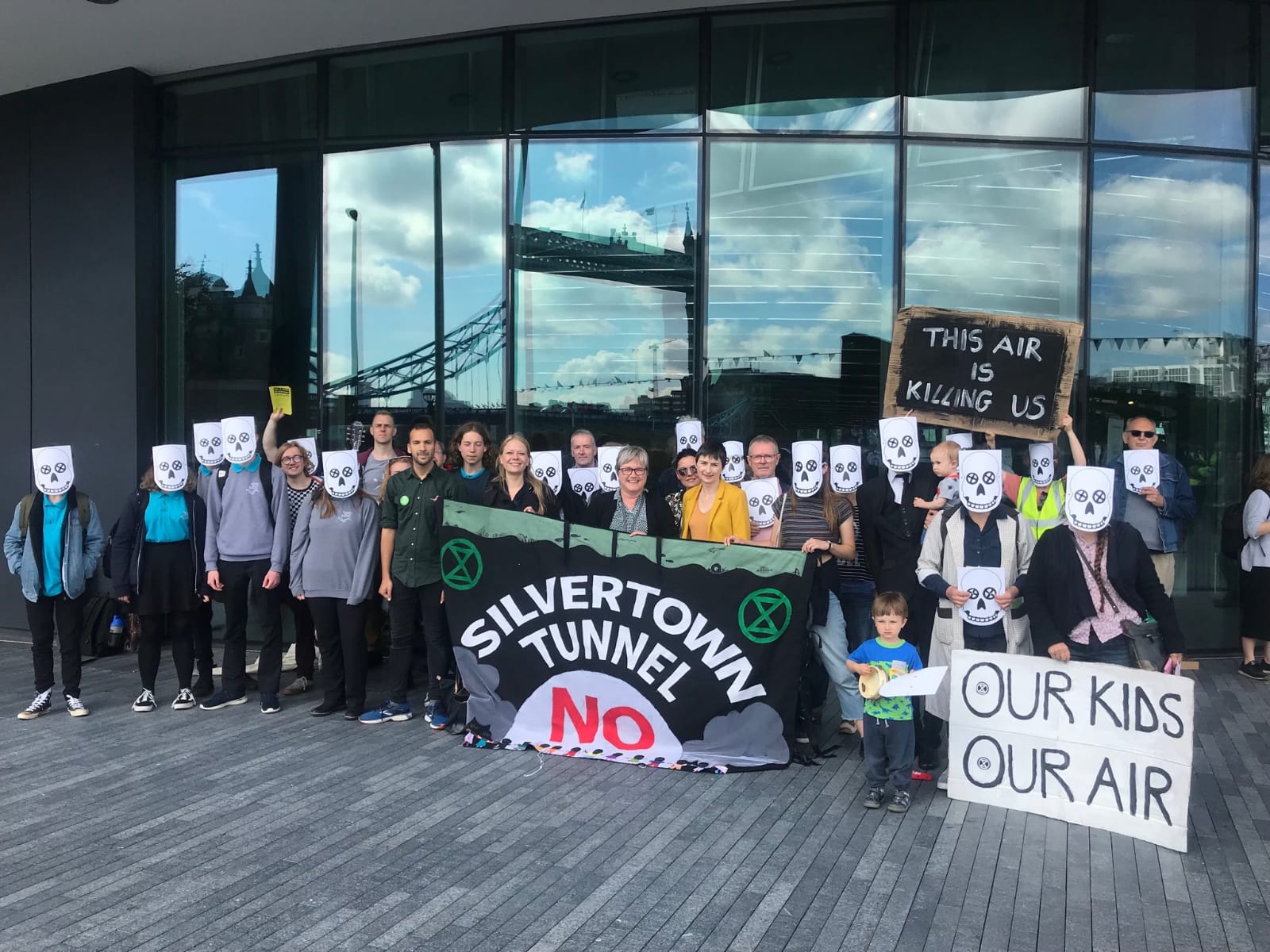 Local members continue to be involved in the cross-party campaign to this day. Charlton activist Charlie (pictured above) writes: “As a father of two boys under 4, and living a stone's throw from the Blackwall Tunnel approach road, I feel it is incredibly important that this polluting and expensive project is stopped.

Spending £1bn to INCREASE road capacity which will only see the air quality stay the same IF expensive tolls that will damage the local economy remain in place indefinitely is no way to combat the Climate Emergency.

My sons will go to school in an area where air pollution already breaches legal limits which is detrimental to their health and development.

For this reason I continue to support the Stop Silvertown Tunnel coalition and attended a protest outside City Hall with LibDem and Green London Assembly Members as well as activists from Extinction Rebellion to petition the Mayor to rethink his support.”

What can we do to stop the Tunnel?

The decision now lies solely with the Mayor (it was stated at the meeting). Contracts are due to be signed in August. Pressure needs to be put on him and other elected Labour officials. Remind them there is an election next year! Liberal Democrat GLA and Mayoral candidates oppose the Tunnel and would be willing to invest in greener solutions – will Labour listen to the people and follow suit?

The full text of Stop the Silvertown Tunnel’s suggested text can be found at their website, but the main points are:

I am writing to you about the Silvertown Tunnel. On the basis of the quality of the evidence in terms of air quality, congestion and public health – the Liberal Democrats, Greens, residents groups, environmental campaigners and others continue to oppose this. Cancel the Tunnel – don’t sign the contracts. The £1bn road tunnel would result in a net increase in carbon emissions of 153,000 tonnes of CO2 over doing nothing (from construction alone). It is retrogressive, irresponsible and unaffordable in a climate emergency: new road infrastructure will bring more vehicles, and with them not just emissions but also particulates. Instead, commit to looking into other solutions to London’s traffic and air quality problems, such as smart road pricing, and investment in the quality, reach and frequency of public transportation, walking and cycling infrastructure in South East London (for example the extension of the DLR to the south of the borough and further east to Thamesmead). Ahead of the 2020 and 2022 elections, we are looking to you to listen to voters and do what is right.

(You are likely to need to include your postal address in the email the meet the requirement for elected officials to be able to respond to only those who live in their area.)