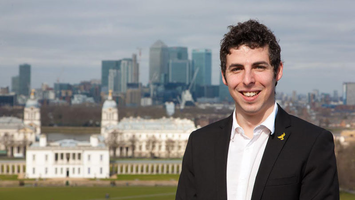 Tom, 29, worked as a secondary school maths and economics teacher in an inner London state school after graduating from Oxford University, where he focused on Economics and Politics. Tom later left teaching to pursue work in science communication, encouraging open dialogue on issues relating to biomedical science.

With a keen interest in education policy, Tom fervently believes that all children should have access to a high quality education that provides them with the necessary skills and aspirations to succeed. He is also a proponent of evidence-based policy, particularly on scientific issues like drug policy and climate change.

"I am honoured by the opportunity to stand as the Liberal Democrat candidate in Greenwich and Woolwich. I look forward to defending the record of the Liberal Democrats in government, and challenging the "safe seat" complacency by Labour MPs and candidates which does nothing to benefit the people of the Royal Borough of Greenwich.

"Labour continue to threaten the economic stability that the British people have worked hard to achieve over the last five years. Their proposal to change tuition fees would jeopardise the world-class quality of our university education system. Under the Liberal Democrats, more people than ever before are attending university - an achievement we can all be proud of. "